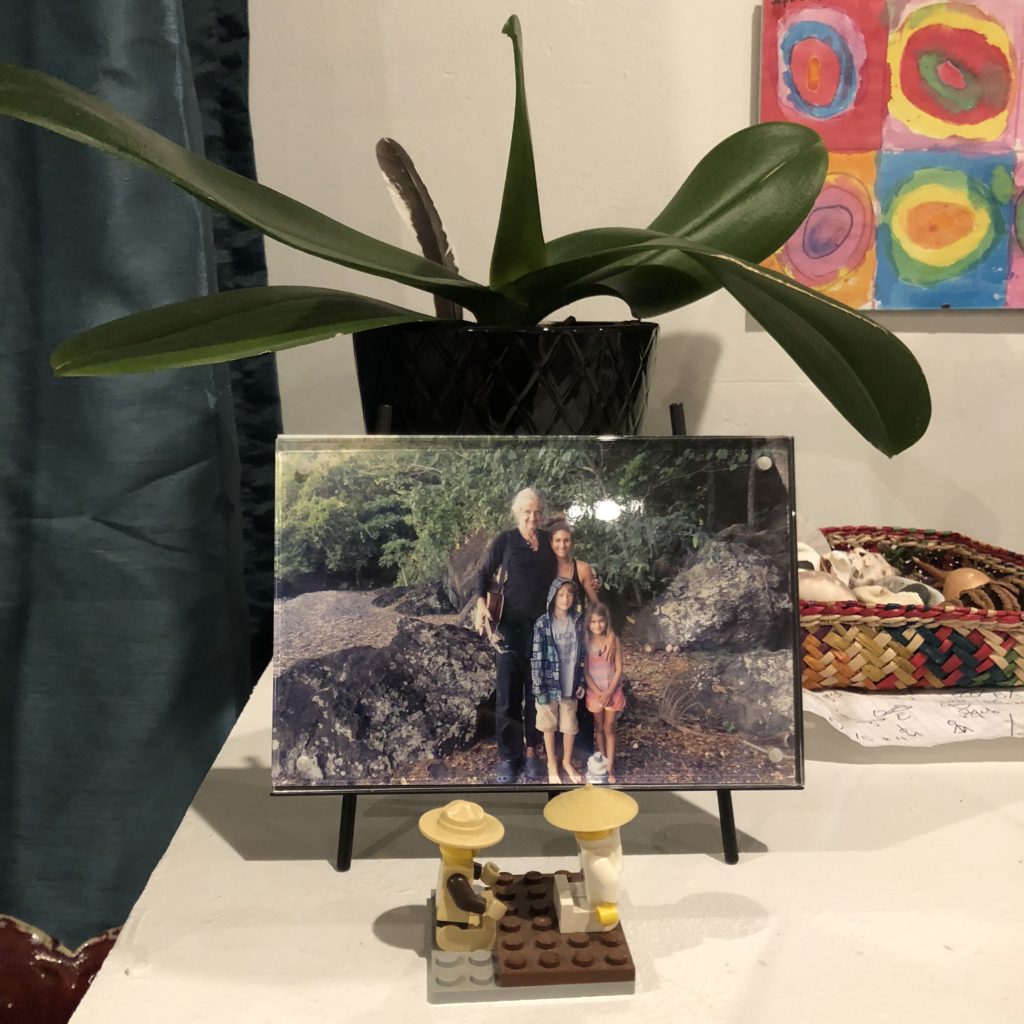 This is written with respect, love and friendship to my Teacher Mark Whitwell, my Guru – in the deepest sense of the word: a weighty, serious (not humorless!), relationship.

I have been blessed to have a few gurus in my life.

February 2, 2004, was an auspicious day on the northeastern coastline of New Zealand, where on a 250-acre private property named Oruaya Bay, I met my Mark Whitwell. And I also met Wayne Buss.

I want to tell you the story of how the three of us met because ever since that meeting on that fateful day, my life audaciously transformed.  I continue to be supported by those two great men and all of the fruits of our relationships, personal and professional in profound ways.  It is through both of them that I have found myself at 38 years old with two blessed children, a fabulous partner, living in my own home in Santa Barbara, CA, linked with the best communities (locally and globally) I’ve ever known, and sending my children to the best school I’ve ever known.  I cherish the fact that I get to be present in my children’s young lives as they learn about the world, and it is my greatest gift to love them, encourage them and hope for a loving, peaceful, bright future for everyOne. I hope that my work is true to the yoga that Sri T. Krishnamacharya, U.G. Krishnamurti and Mark have brought forth.

In this spirit, I dedicate this blog to continuing friendships, everywhere, with everyone. I believe in miracles, the human spirit, and I love to be here, with you.

And now the story of my Gurus Mark and Wayne.

When I was 22, I ended up in New Zealand.  (How I got there is a great story for another time!) I was supposed to be working my way around the world, and this was the first stop. I’ll never forget coming around the narrow, backward road to see the Ngunguru Estuary at dawn.  Mist covered the blue-obsidian, mirror-like water as the golden rays of sunshine began to beam through the clouds. The sandspit. The oystercatchers. The grand pohutakawas’ arms hugging the river banks.

The only way I’ve ever been able to describe it is this – I was overwhelmed with a feeling of being home.

So I stayed. There were travelers like me from all over the world that I quickly lived, worked and surfed with…all day, every day.  We all became rather close 🙂 I loved the community so much, I lept at the opportunity to help organize a surfing competition and became even more involved with the locals’ lives in the first few months of my arrival. I also had a miraculous encounter that led to my being able to obtain Permanent Residency in NZ.

I also began to dive deeper into my studies of yoga under the tutelage of Agnes Hartley, the legendary crone who co-created the Integral Yoga Academy of Australasia. Through her, I became introduced to the World Oasis team – four local women (Alison, Lynne, Robin, Lucia) who had a vision of building a retreat center on the Tutukaka Coast.  They knew about an American man who held a similar vision and had the property and means to make this a reality.

That man was Wayne.

On February 2, 2004, the World Oasis team invited me to Wayne’s property, known as Oruaea Bay. He spelled it Oruaya because, he said, then people could pronounce it.  To get to the property, I first had to drive past the famous surf spot, Sandy Bay, up the hill to the Whananaki Coastline Trailhead.  At the gate, where it says No Trespassing, I got to drive through.  All the way to where the trail ends, at Oruaya Bay. That road is pure heaven. Imagine passing seven tiny bays as you curve in and out along the coastline, cattle grazing the terraced, steep slopes, old groves of ancient forest popping out to create tunnels and havens for the animals, and the turquoise blue water finding its rhythm along the rugged rocks and tranquil beaches.

Driving down the last hill into the valley, I could see all of the women setting up their tents, with many young children running around gathering their swim gear to take to the beach.  I quickly parked, found a place to park my car (I was car camping; a luxury of not having children!) and then began the stroll to the beach. The dirt path twisted and turned alongside the narrow creek.  Hidden valleys immersed on both sides, and deep within I could see huge Totara and Rimu trees, hundreds of years old. The alluvial fingers of the creek meeting the sandy beach emerged, and I could hear laughter and shrieks of delight.

Then I saw Wayne, body-surfing with the boys and girls, just like a big kid himself.  He was adorable. And kind. And I knew he was a good man from that very first moment.

That evening, as the adults were making dinner and the children were playing games in the tall grassy hills, a rusty, old, beat up jalopy slowly rambled down the road towards our camp.  When it parked and the dust settled, the door opened and two legs with skinny red jeans stood up to produce a Gandolf-like figure wearing a white t-shirt, a black jacket and a grey beanie, his long, grey wavy hair elegant and messy simultaneously.

That man was Mark.

Mark introduced himself.  He’d been invited by Alison.  She was a student of his and believed he’d appreciate meeting Wayne and learning about their vision to create a retreat center. I said hello and smiled.  He smiled back.

Dinner was ready then. Before we ate, though, Mark said prayers to the land and people in Maori.  It was beautiful, guttural and sweet altogether.

After dinner, we all sat by the fire and shared stories.  Before going to bed, Wayne asked me if I wanted to see something special.  I followed him through the tall grass, into the bush, up the hill, to the top of the peninsula and then out to the edge of the cliff.  Here, on Seagull Song Point (he named all of the places on his land) we sat shoulder to shoulder, our feet dangling over the edge 100 feet above the ocean crashing on the boulders below, surrounded by water a full 270 degrees, and the full moon rising above the Poor Knights Islands miles off in the distance. We sat t(here) for hours, talking about our greatest hopes and dreams, our fears and regrets, the beliefs we held most sacred and what we most-longed for in our souls.

We knew we’d found something special in each other. We didn’t think it was a coincidence that two Americans transplanted themselves on this tiny coastline in the middle of the South Pacific with the same visions and aspirations. I had no idea how significant our love would be, though.

Two days later, my parents came to visit for the first time.  As I took them out to the Coast, we drove past Wayne’s other home in Glenbervie.  I had to return something, so I thought we’d pop in really quickly.  As we drove down the walnut, macadamia and avocado-lined driveway, I said to my parents, “I don’t know why, but I feel that this man is going to play a very important role in my life.” Moments later, they all shook hands and said pleasantries.  We took a quick tour of his home, my parents took a picture of us, and then we were off.

Three months later, Wayne called me.  He had just returned from being in the USA, and he had made the decision to live in NZ permanently. He wanted to get together.  And we did.

We fell in love very quickly, and within a month I had moved in. I’d never known anyone as brilliant, loving, generous, capable and all-around phenomenal in my entire life.  A couple of months later, he asked me to marry him. I didn’t hesitate.

In discussing our wedding, we knew we wanted Mark to be our celebrant.  There was just something about Mark that we loved. Wayne contacted him and they began to make plans.  I spoke with Mark briefly over the next few months, but I wasn’t able to tell him, or anyone about what was starting to happen with Wayne.

I loved him with all my being, and in the end, he took his own life on December 2, 2004 – exactly ten months after we first met.

My mother immediately flew out to be with me, and I was grateful for my “kiwi family,” Denis and Marilyn Eltringham. I called Mark and told him the news.  He was devastated, too; it was like losing a soul brother.

As the grief process began, I started to feel physically unwell so I went to see my doctor. Lo and behold, the doctor told me I was pregnant! It was the day before Wayne’s funeral.

During this time, the range of emotions I experienced was intense, as you can imagine. I’ll go into more details of that time later, though.  For this story, what matters is this: Life carries on.

I gave birth to my son and named him William, it was his father’s middle name. I also went on to meet another man and have my daughter, Elizabella, with him.

About five years after Wayne’s death, my contact with Mark and the World Oasis team had become minimal.  I had neglected my own yoga practice, and the dreams I had once held with Wayne had been damaged, rectified, destroyed and reinvented so many times that I was exhausted.  I also had two little kids and was managing a natural health clinic with over 30 practitioners that my husband and I had created.

It was when a nurse told me over the phone in a mechanic’s garage that I might have cervical cancer, that I knew I had to make some changes.  I decided to return to my yoga studies and dove into preparing for a two-week intensive course in Australia.  After completing the required reading early, I remembered that I had fifty copies of Mark’s book in my garage – unopened gifts to wedding guests that Wayne had purchased.

I got the dusty, cardboard boxes down from the garage’s top shelf, and sat at my kitchen table. It was late at night and the fire was crackling when I opened Yoga of Heart: The Healing Power of Intimate Connection to a page that said, “A guru is no more than a friend, no less than a friend.”

Of course. Mark was my guru.

Thus began my re-connection with Mark and my introduction to learning my yoga. In 2010, I went to Fiji for a two-week training with Mark that solidified my yoga, my heart’s direction, as my practice.  During this time, I also experienced the deepest healing of my grief and began this last period of my life that has been dedicated to helping Mark teach yoga to as many people around the world as possible.

Now it is my time to teach.  First, I practice myself.  Second, I have a good relationship with my Teacher. Third, I care about you.

I’m eternally grateful for Mark and his teachers, Sri. T Krishnamacharya, TKV Desikachar, and U.G. Krishnamurti. And to Wayne, my love and gratitude are endless – you made me a Mother.